Brown ring patch, also known as Waitea patch, is a “new” disease of annual bluegrass putting greens that has recently appeared in the western, Midwestern and northeastern United States. The disease is caused by a species closely related to Rhizoctonia oryzae and R. zeae, which are known to cause sheath and leaf spot or high-temperature brown patch in the United States. The formal name of the pathogen (named after its observed sexual state) is Waitea circinata var. circinata (Wcc).

The disease has been reported in numerous locations across the country, including California, Connecticut, Illinois, Indiana, Massachusetts, Nevada, New York, Ohio, Oregon, Rhode Island and Washington. 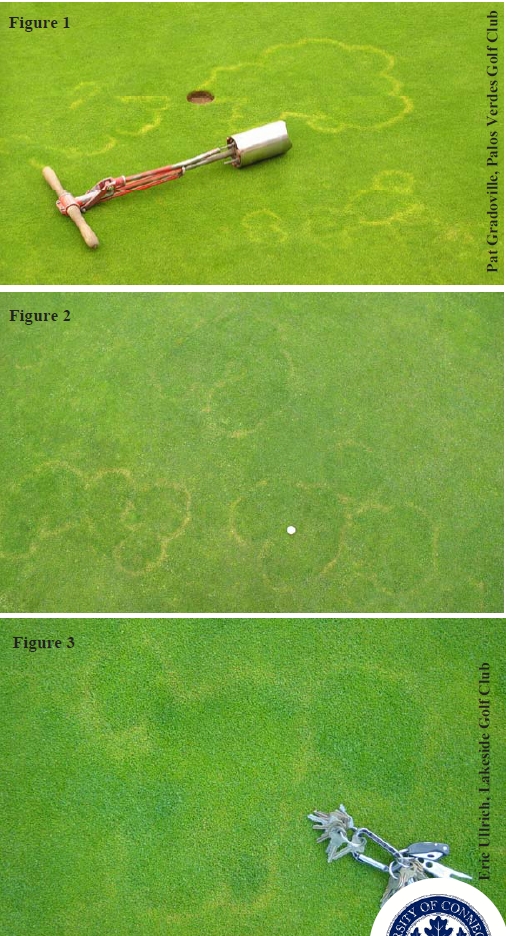 Initial symptoms on greens begin as diffuse, thin yellow rings or crescents (a few inches to a foot in diameter) that can turn golden-brown under hot or wet conditions (Fig. 1). Often, the rings will be uneven and have a “scalloped” appearance (Fig. 2). On low fertility greens, sometimes a green halo can be seen surrounding or inside of the yellow rings (Fig. 3). Symptoms can be confused with those of yellow patch, fairy ring or necrotic ring spot.

Abundant mycelia can be seen on the foliage, down in the crowns, stolons and in the thatch when the soil is moist (Fig. 4). The pathogen tends to colonize both the above-ground parts of the plant and the thatch, which can result in sunken rings where the thatch has broken down. The mycelia canbe rather fluffy and extensive under wet conditions. The disease has been observed at daytime temperatures ranging from 50ºF to 90ºF, with optimal temperatures of 70ºF to 85ºF. Because it can actively colonize thatch, the disease may be more severe on putting greens with excessive organic matter accumulation. During the spring and early summer months, disease symptoms appear as yellow rings ranging from a few inches up to a foot in diameter. Although infected annual bluegrass generally does not entirely collapse, turfgrass thinning and/or plant death can occur. Under hot and dry conditions, disease symptoms generally disappear. The disease, however, may recur as temperatures favoring growth of the pathogen develop in the autumn months. The disease symptoms remained visible until treated with an effective fungicide.

Recommendations for control are based on in vitro testing of fungicides in the lab, a limited field study in California, and anecdotal evidence and reports from superintendents. In the lab, a number of isolates of the pathogen were screened on Petri plates against Chipco 26 GT®, Banner MAXX®, Cleary’s 3336®, Heritage® and
ProStar® fungicides. With the exception of Cleary’s 3336®, all fungicides evaluated in this study effectively suppressed mycelium growth. Like its closely related relative, R. zeae, Wcc appears to be naturally resistant to the benzimidazole fungicides. Superintendents have reported mixed results for Wcc control with fungicides; ProStar, Heritage, Medallion and Endorse fungicides seem to consistently provide the greatest level of control. Since Wcc is often in the thatch layer, adequate application volume (≥ 2 gallons of water per 1000 ft2) and/or watering-in materials into the upper thatch layer is important. If the disease is already well established in the thatch or turf, multiple applications may be needed to completely stop the pathogen. In severe cases, recovery from damage is slow due to the amount of crown damage and thatch degradation. Preventive or early curative control is likely most effective. 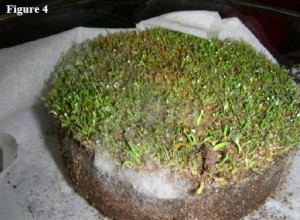